The seasoning you love, now in bag form.

Back when I reviewed Trader Joe’s South African Smoke Seasoning I was delighted to discover it was one of Trader Joe’s hidden gems. Easy to overlook on shelves full of peppercorn grinders and rock salt, this South African style seasoning is imbued with a whole different dimension of flavor – the savory, rich taste of smoked meat.

When used on hamburger, steak, chicken, or anything you might like to barbecue, it’s a killer seasoning that brings to the fore the richer, meatier flavors hidden in any meat – a little magic touch of South African umami.

Of course Trader Joe’s would be Trader Joe’s if they could just leave it there. Which has lead, apparenlty, to Trader Joe’s throwing this seasoning designed for meat onto potato chips with the new Trader Joe’s Potato Chips with South African Style Seasoning.

It’s an innovation that could go either way. On the one hand, we live in an age of out-of-control potato chip creativity. Bold, daring and, some might say, insane flavors of potato chips are not just possible to find, but aggressively marketed from supermarket shelves. 10 years ago about the most “out there” chip you could find was jalapeno. Nowadays you can dabble in the sorts of epicurean excess that would have made Nero take note. Chicken & waffle flavored potato chips,  mac & cheese,  wasabi ginger, balsamic vinegar & rosemary, – even cappuccino, by god, cappuccino! It’s an age of snack madness, and one that Trader Joe’s is clearly unafraid to get in on. Already they’ve weighed in on with their non-standarad Beurre Meuniere Popcorn. Throwing a meat seasoning onto potato chips is almost tame by comparison.

So we can’t doubt the boldness of Trader Joe’s resolve or vision – the question is, does this seasoning  actually go well on potato chips. The answer, sadly, is no.

The same qualities that make the South African Smoke Seasoning so savory on meat work against it here – it’s simply too salty and strong tasting for the simple potato chips. Divorced of a meat base, the seasoning has nothing to work off of. The result is sort of like throwing a handful of the seasoning directly into your mouth. It’s not that the taste of the seasoning is bad, it’s simply overpowering. When used on a grilled steak or hamburger, the smoke seasoning simply blends in to the complex profile of the flavors at hand. Here, on its own, it has the very strong taste of bratwurst, or as one taste tester put it, “burnt hot dog”.

How much you’re going to like these chips, then, depends on how much you like that heavy, bratwurst taste, without getting the juicy bratwurst bite. This wouldn’t be as much of a dealer breaker if it wasn’t for the strength of the taste. Trader Joe’s isn’t mincing around here – each chip is blasted with a full on shot of seasoning that is close to overwhelming. These chips are best not eaten by the handful, but slowly, one by one, or not at all.

For me the intensity of the flavor simply didn’t work together very well. Between the serious saltiness, and the heavy seasoning these chips tended to overshadow whatever I was eating them with. When your potato chips taste more like hot dogs than the hot dogs themselves, it’s generally not a good thing.

The chips may not work very well as chips because of the seasoning, but what if they were the seasoning. That barely coherent thought is what lead me to cook up the recipe below – country fried steak, with crushed potato chips instead of breading. 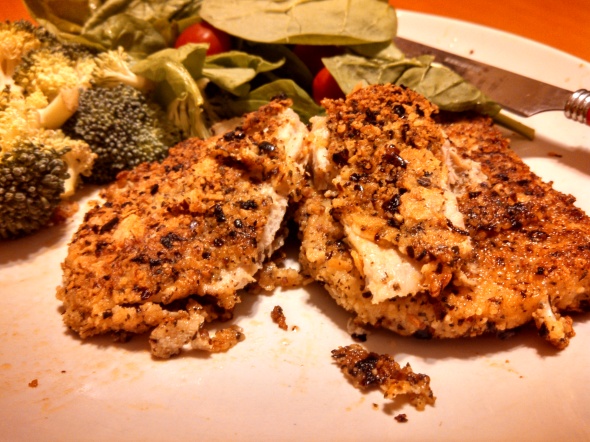 Notes: This recipe delivers a crunchier steak than you might otherwise get, and the African Smoke Seasoning lends it’s helping hand, giving it a robust, BBQ sort of taste.

Turning chips into the seasoning instead of  just adding the seasoning directly might be considered taking the long way around, and that’s a fair criticism, but dammit we live in the world of the Mini Waffle Stick Maker and Segway. If something’s worth doing, it’s worth doing in an unnecessarily, silly way.

A delicious gravy is bound to help these steaks out, but that’s beyond the purview of this post.

Would I Recommend It: Not unless you usually feel your brautwurts aren’t brautwursty enough.

Would I Buy Them Again: I don’t think so.

Trader Joe’s BBQ Rub and Seasoning with Coffee and Garlic 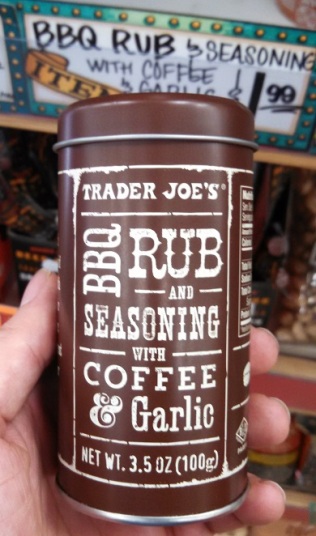 I love your titles TJ, but when you have to start rotating words like puzzle pieces to fit them on your packaging, things have gotten out of hand.

I’m sorry, what? Can you repeat that please? Did you say, Trader Joe’s BBQ Rub and Seasoning with Cofffee and Garlic? Does that make any sense at all? This one is truly mind boggling. I knew Trader Joe’s didn’t give a flying fig about convention, I knew that the second I saw them stocking Toasted Pumpkin Seed Oil on their shelves, I knew that when I picked up their Avagadro’s Number themed guacamole, but even I didn’t dream they were this dangerously unhinged.

I’d like to put myself in the mindset of the Trader Joe’s food scientist who dreamed up this insane blend of seasonings, but I’m afraid to do so would be to permanently wrench my psyche from it’s bearings. Coffee grounds and garlic – blended together, for the sake of rubbing on your meat. It’s got to be a stunt, right? Maybe there isn’t that much coffee in it, or maybe it’s, like, a type of coffee that isn’t really coffee. Let’s just check out the ingredient label.

Okay, we’ll, there’s a bunch of other stuff in here too. Look – brown sugar, salt, garlic, um… paprika… and, uh, clemengold rind,? Which is apparently the skin of the Nandorcott mandarin orange? Okay, that’s a new one. At any rate, it must, like, all blend together in a way that sort of hides the strong coffee taste amid many flavors. Let’s just open it up and take a whiff. Wow – nope, that’s coffee. That is straight up coffee. I can’t imagine this is going to be any good.

And this, folks, is where it gets even crazier. After all that, when you really get down to it, this seasoning is spicy, flavorful, intriguing, nuanced, and totally worth your $1.99.

Crazy though it may sound to me, coffee rubs are not a wholesale invention of Trader Joe’s. Many in the hardcore slow-cooked meat world have experimented with the intriguing addition of robust coffee grounds to otherwise ordinary rubs. Despite the intense coffee smell of the rub, the taste is actually much more diverse and interesting. Coffee, being coffee, has a smell that tends to overshadow everything around it. On the tongue, however, that bold, bitter coffee taste is joined by a medley of other equally strong flavors that stand out on their own. The coffee gives way, in turn, to sparks of sweetness, sudden notes of saltiness, and the simmering, low key spiciness of the garlic and paprika.

These flavors do not blend, but tussle for position on your taste buds, and that’s what makes this rub work. It’s not a single flavor, or polite union of similar flavors, it’s a raucous dust up of competing tastes. It’s a tour of the whole tongue, with fun flavors for every taste bud. I’d be interested to see how this stuff would taste without all the coffee in it, to be honest, but having the coffee is what makes it really stand out. While other rubs commonly play up to saltiness, Trader Joe’s Coffee and Garlic Rub plays up the boldness, and it’s this strong base note that gives the riot of other flavors the grounds to go wild.

Trader Joe’s also suggests that you can use this rub as a seasoning on veggies, fish, etc. I’m not sure I’d recommend that myself. While it isn’t bad, per se, the rub is so intense that it can only really be used in tiny amounts, and even then you probably want to mix in another, more traditional seasoning to round out the taste.

One final caveat – make sure you leave yourself plenty of time for the flavors of the rub to permeate your ribs, steaks etc. Trader Joe’s recommends at least an hour – but the longer you wait the richer the flavor in the end. Give this rub as much time as possible on your meat, and apply it generously, for the full effect. Just don’t wait until too late at night to eat. This is real coffee in the rub and, as I discovered, a late dinner might leave up for hours.

Would I Recommend It: Absolutely. This will shake up your life a little.

Would I Buy It Again: I think I’ll stock up on a little more.

Final Synopsis: A bold, mix of bitter, salty and sweet flavors that you should try at least once.