Looks like cider, tastes like pumpkin and a playing card on the label. Ace is sort of mixing its metaphors here.

Every now and then I feel compelled to review a product at Trader Joe’s that isn’t on the actual Trader Joe’s brand. I’ve done it once or twice before, and only if I’m sufficiently intrigued by the weird nature of the product. When I saw ACE Hard Pumpkin Cider in the store the the other day, I simply couldn’t contain my curiosity. I’ve heard of apple ciders before, obviously, and even pear ciders. But pumpkin? That’s just crazy enough to get you on this blog.

A good hard cider isn’t an easy thing to come by in the states. They have a rather more robust history in the old UK and across the continent, but never took off in a big way in America – this despite a strong start in the nation’s infancy. In fact, for a non-trivial portion of America’s history hard cider was drunk like water, literally. In the colonial era, the notion of practical sanitation was a far off dream. As a result of water-borne illnesses, the populous quickly started looking for alternatives to keep them healthy, hydrated and maybe get them a little drunk to boot. The common solution was hard apple cider, which became the most common beverage to drink with meals.

As time went on, of course, public sanitation came into vogue. Water lost its stigma of being unhealthy, and beer rose to the position of most patriotic beverage. Nevertheless, the way was paved for pumpkin cider which, despite my high hopes, is not actually squeezed out of pumpkins in a giant pumpkin press, but made by adding natural flavorings to ordinary hard cider.

How does it taste? Well, a bit like pumpkin, really. The apple juice that makes up the base of this cider is still the primary and unmistakable component of the drink, but ACE doesn’t skimp on the natural pumpkin flavoring either. Crack open the bottle and you’ll get not only a bouquet of pumpkin up your nose right off the bat, but a rich blend of spices that embodies all of late fall. I’ll admit that one of the reasons I bought this drink was because, standing there on the supermarket floor, I couldn’t really conceptualize what pumpkin smelled like and I hungered for the experience. (The other reason, of course, was to give me an excuse to get drunk). The pumpkin you find in this bottle is similar to the pumpkin you find in a good pumpkin pie, not overly sweet but a more basic, essential pumpkin mixed with allspice, cinnamon and cloves. If you can drink this and not be transported back to a childhood memory of crunching leaves underfoot then you are probably dead inside (or grew up in a tropical -to-semi-tropical climate, one of the two).

Speaking of deadening yourself, the cider packs a reasonably strong punch – 5% alcohol by volume. That puts it toe to toe with most beers on the market. The over-sized 22 oz bottle, on the other hand, ensure that once you open this thing up you won’t be going out for the evening.

I’m going to stay out of the cider vs. beer controversy on the grounds that it is stupid. Cider and beer can and should exist happily side by side, although if we’re keeping score ACE’s pumpkin cider is gluten-free and has lower calorie than beers with the same alcohol content.

I haven’t had a hard cider that I’ve ever really liked before, everything I’ve ever tried has seemed too sweet or too cheap, but I liked this cider and I’d go back to it again. That said, pumpkin cider is ultimately a seasonal drink and a novelty. It’s never going to replace beer, or even a hypothetical, good, hard apple cider, but it could absolutely find a place on the counter next to the egg nog.

Would I Recommend It: If you’re into novel seasonal drinks, absolutely.

Would I Buy It Again: Sure, next fall.

Final Synopsis: A quality cider, with or without the pumpkin gimmick. 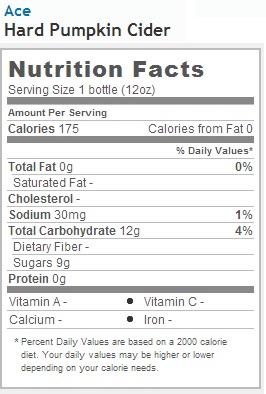