A guacamole that’s as Greek as it is Hispanic.

“Reduced Guilt”, as in Trader Joe’s Reduced Guilt Chunky Guacamole, is one of those phrases that are a little too marketing-y for me. What does that really mean, “reduced-guilt”? We all just want to enjoy ourselves in life, right? If you’re like me, that means repressing and/or ignoring the constant nagging feeling of guilt that would otherwise hound you at all moments, threatening to drag you down the muddy hill of self-loathing into the murky bogs of depression. Free-floating guilt, we all got it – do we really need Trader Joe insinuating it into our lives even here, in the vegetable aisle?

Here I was, in danger of feeling pretty good about myself for a moment, putting a bag of  shredded carrots into my cart, making positive decisions and following a healthy path! Except, oh man, there’s the Reduced-Guilt Guacamole. “Reduced-guilt” because consuming calories induce guilt, and guacamole has a lot of them. Ergo, eating this guacamole means I don’t have to feel as bad about myself. Hooray!

Except, wait – doesn’t everything have calories? Even my bag of carrot shreds? And I have to eat calories to live… but eating calories induce guilt… and, oh no, I’m never going to win ever am I? Sure, I can reduce guilt – but never eliminate it. Never escape the inherent guilt of calories. Never escape the vicious cycle of consumption and loss until, at last, death claims me. And there I am again, down in the bogs of depression.

Thanks a lot Trader Joe’s.

Assuming you made it this far in this post, or have a healthier sense of self-worth than I do, you’re probably wondering a couple things about this guacamole. For one, you’re probably wondering if “reduced guilt” in this case is actually a synonym for “bad tasting”. Unfortunately, the answer is yes. That said, I feel we have to judge these sort of “healthy option” food products on a curve.

We all know that the healthy option isn’t going to taste as good as the real, full calorie, thing. The question is, does the healthy option hit that sweet spot of tasting good enough for how few calories it has? A little while ago we saw Trader Joe’s Fat Free Brownies undergo this test. Trader Joe’s Reduced Guilt Chunky Guacamole does a little better, not because it tastes all that good, but because it’s a really damn healthy option. Each 1 oz serving of this guacamole contains only 30 calories and 2 grams of fat. That’s 40% fewer calories, and 50% less fat than Trader Joe’s Avacado’s Number Guacamole.

With half the calories, does that mean it only tastes half as good? Yes, actually – that’s a pretty good description of this stuff. This low fat version of guacamole definitely lacks the full-bodied flavor and punch of a regular guac.

When you take a dip of it, it starts to taste good but then stops about half way, leaving a vague sense of dissatisfaction. On the other hand, it manages to match the creaminess of regular guac and is just as filling to snack on. That’s not bad for a diet food, where managing to come out even is practically a win.

To put it another way, for a low calorie dip this stuff is pretty good, but for guacamole it doesn’t really pass snuff. A big part of that is because you’re only getting about half as much avocado as usual in your guacamole. The rest is made up for by non-fat greek yogurt. I can only imagine that this non-traditional ingredient is the main reason this guacamole doesn’t get the traditional “Trader Jose’s” appellation.

Part of me wants to praise Trader Joe’s for going out there and making a healthy guacamole alternative. However, I can’t help but think it’s all rather pointless. After all, guacamole’s only really good with chips – and there’s nothing remotely diet friendly about a bunch of tortilla chips. Yes, I suppose you could eat this with some celery sticks or such, but in that case wouldn’t you be much better off with some low-fat ranch dressing instead? Even Trader Joe’s Veggie Chip Potato Snacks and crunchy lentil curls aren’t quite so healthy enough that the diet conscious could feel free to go out and eat a big handful.

In the end, I guess Trader Joe’s is true to their word – you get a guacamole that reduces your guilt, but doesn’t absolve it.

Would I Recommend It: Not really. It’s fine for a healthy dip, but there aren’t a lot of healthy ways to enjoy it.

Would I Buy It Again: No, I think I’ll stick to the real stuff.

Final Synopsis: A low calorie guacamole with half the calories and about half the taste. 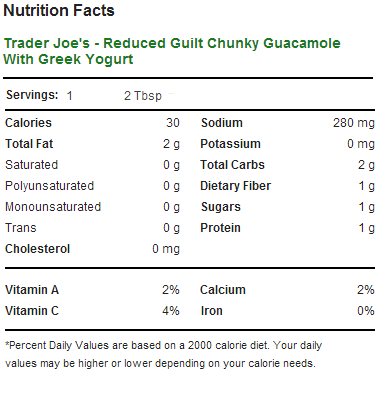 I’ve heaped some pretty high praise on the names of a few Trader Joe’s products before – but as of this moment those items are dead to me. There’s only room in my heart for one truly amazingly named product and the throne now belongs to Trader Jose’s Avocado’s Number Guacamole. Truly, I can’t imagine it will ever be deposed.

Avacado’s Number Guacamole is awesome for many reasons.

Before we get to the guacamole itself, which is quite tasty, we’ve got to spend a few minutes just looking at what the hell is going on here. First, lets just try and wrap our brains around the international gumbo we’re knee deep in here. The guacamole is a Trader Jose’s product, being a traditionally Mexican food of course, featuring the picture of, and named after, an Italian who doesn’t actually have anything to do with Avagadro’s number other than the fact that a Frenchman decided to name his discovery after him in 1909. So that’s one thing.

Yes, despite the slick looks of Mr. Avagadro, he’s only loosely connected with Avagadro’s number. The number in question, the above mentioned 60221413e+23, is one of the cornerstones of modern chemistry and physics – the number of atoms in a conventional unit of measurement called the mole.

The mole, and by extension the number, is essentially a way for us to talk about infinitesimally small and rather fidgety atoms on a reasonable and realistic scale. In 1909 a future noble prize winner and current Frenchman named Jean Baptiste Perrin coined the term to describe his work, naming it in honor of the Italian Amedeo Avagadro. Our man Avagadro lived and died back in the 19th century and amused himself by calculating the volume of gasses, thereby laying the groundwork that lead up to Perrin’s discovery, but had nothing to do with the number that bears his name per se.

Two things bother me about his gucamole. First, it only has five avocados in it which, while pretty good for guacamole, is certainly less than the 602,214,130,000,000,000,000,000 avocados (AKA six hundred and two sextillion, two hundred and fourteen quintillion, one hundred and thirty quadrillion) that the name suggests will be in it. I’m willing to let this slide in this case, seeing as that making the name more truthful would require each man, woman and child on Earth to pick a few trillion avocados first, and that’s just too long to wait for guac.

Really, this guacamole is pretty good. It comes in two separate 8 oz tubs, each one individual sealed. In order to cram in as many avocados as they did, Trader Joe’s has left in the occasional big, uncut chunk. When I say big, I mean big – think potato-chip sized. This really isn’t that bad of a thing – I found that it gives you something to break up the monotony of the otherwise featureless smooth greenness, something to really shake you up and make you confront the reality of your dip.

On the other hand, I did find Trader Joe’s Avacado’s Number Guacamole a bit on the salty side. This wouldn’t present a problem if you were eating it with unsalted chips, but when combined with salted tortilla chips its just a little too salty to really enjoy.

The other thing that bothers me about this guacamole is that Trader Joe’s was willing to go out there for the whole “Avocado’s Number” thing, but just left “mole” and “guacamole” sitting on the table. This is your once chance to ever make a “mole” related guacamole pun, and you missed it TJ! All you had to do was put a hyphen in “guaca-mole” up in the title and say something like

“Don’t ask us how many avocados are in this guaca-mole, ask our friend Amedeo.” Really, really disappointing work there Joe, but otherwise fine.

Would I Recommend It: Yes, especially to physicists who like word play.

Would I Buy It Again: Yes, but I’d use unsalted chips next time.

Final Synopsis: A good guac with an excellent name.