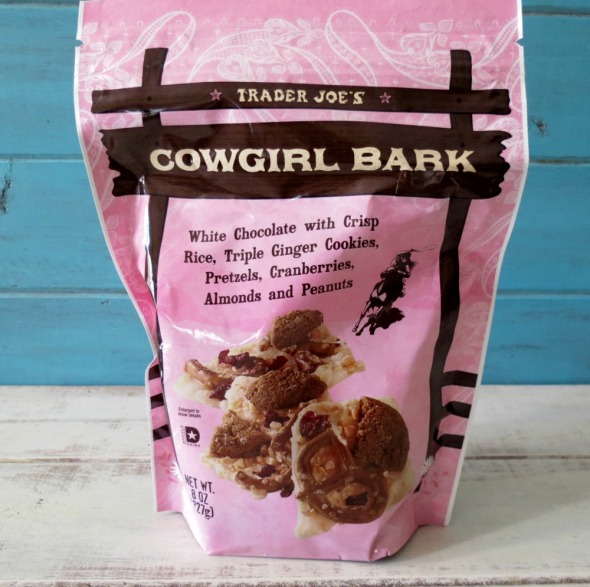 Ginger and cranberries – I suppose that’s kind of girly?

Trader Joe’s Cowgirl Bark raises all sorts of questions. What does that strange set of words mean? Why did TJ decide to keep going with the bark thing, after last years lackluster Cowboy Bark? What is bark? And, most importantly, what makes this a girl bark instead of a boy bark?

While the era of sexism is long from over, society’s the tolerance for male-centric, “we make the rules” BS is lower than it’s ever been. It is a time of striving for equality, and reappraising long held assumptions. It is in this climate that Trader Joe’s decided to make their bag of “girl” candy pink with flowers on it. Pretty brazen move, TJ.

Based just on the bag alone, I had low hopes for this chocolaty snack bag. Neither myself nor any of my taste testers had much love for the Cowboy Bark, a rather lazily styled re-release didn’t seem like it was going to change my mind. The formula, as Trader Joe’s points out on the bag, is certainly different – white chocolate, crisp rice, triple ginger cookies, pretzels, cranberries, almonds and peanuts and mushed together instead of dark chocolate, toffee, Joe Joe cookies, pretzels, almonds and peanuts all mushed together.

In theory, it doesn’t sound that bad, except, of course, for those two words right up front – white chocolate. The world is filled with a plethora of strange thing, but white chocolate is, to me, one of the strangest. Whoever was in charge of protecting the chocolate name against low-quality imitators was clearly out to lunch when white chocolate came along. Although I’ve had the occasional falling out with chocolate, it’s still  a beautiful, wonderful thing – delicious in any form, and on any occasion. Like bad sex, as they say, bad chocolate is still pretty good.

Is that unfair to this “white” sheep of the chocolate family? Certainly not, white chocolate sucks, that’s all. In addition to it’s delicious sugar and cream contents, real chocolate contains a wide rage of intriguing stimulants and anti-oxidants, such as theobromine, thiamine, phenylethylamine, and of course, our good buddy caffeine. In white chocolate, all of these are missing – stripped from the chocolate, on purpose, in order to turn it into white chocolate. White chocolate is, literally, what’s left over when you take all the good stuff out of chocolate. The colorless corpse of chocolate, from which the soul has departed.

And yet folks – and yet, I actually like Trader Joe’s Cowgirl Bark considerably better than their Cowboy Bark. The big failing of the Cowboy bark was that the intensity of the dark chocolate overpowered the other, allegedly tasty, ingredients. With white chocolate there’s no such problem, and the pretzels, peanuts, et al. get to make their presence known. The result is actually a fairly tasty mash up of chocolate and snack foods. You’ll certainly notice the salty pretzels and crunchy nuts the most, with the cranberries and ginger cookies more or less unnoticeable amid all the other noise.

Nevertheless, overall this bark basically works. I wasn’t wowed by it, and it may be made with white chocolate, but taken altogether the salty, sweet punch of the candy is good enough to bring you back to bag for seconds and thirds. There’s certainly room to improve – storing chocolate in a loose bag, as we’ve explored before, is not a good idea unless you want it to melt together into a huge messy blob – but Trader Joe’s is getting closer. Maybe they’ll come out with a third iteration using milk chocolate instead (Cow Bark perhaps?), and it will actually win me over. There’s a brilliant idea in here somewhere, they just haven’t quite reached it yet. Until then, the general populous can probably steer clear.

Would I Recommend It: With hesitation, to people who don’t mind messy fingers.

Final Synopsis: A treat best reserved for people who like white chocolate, like confectionery bark, or both.

Well, we’ve seen some good names from Trader Joe’s before, but Trader Joe’s Ruggedly Adventuresome Cowboy Bark may take the cake for over-the-top product naming. Some marketer somewhere is recovering from a spraining their brain muscle after coming up with this one.

Calling a pretty standard chocolate bark “cowboy bark” to begin with is already a wildly out of the box move – it’s not like there’s anything particularly “cowboy” about this chocolate bark in the first place. In fact, a decadent, dark chocolate treat sprinkled with cookies and toffee is one of the harder things to imagine a weather-beaten cowboy pulling out of his saddle bag on the range. Consider that, on top of this, they’ve added not just a self-aggrandizing adjective, but a totally unnecessary adverb as well and you’ve got my attention.

I really wanted to like this chocolate bark -not just because I’ll seize any excuse to buy junk food again and again, but because almost nobody is tossing adverbs into their food titles anymore. Chunky Chicken Noodle Soup is a dime a dozen, but good luck finding a can of Superbly Chunked Chicken Noodle Soup. Who doesn’t feel for the poor, overlooked adverb, ignored step-child of the parts of speech family? Who doesn’t wish they encountered more deftly modified adjectives on their daily errands? I definitely do.

So it’s got a good name – a crazy name, but a good one. It seems like we’re dealing with a shoe-in for next years best of list, right? After all, it’s dark chocolate with toffee, pretzels, Joe Joe’s Oreo Cookie knock-offs, peanuts, almonds and, to top it all off, a sprinkling of salt – what’s not to like?

The problem, as you may perhaps have guessed, lays in the dark chocolate base. I’ve said it before, and I’ll say it again, but dark chocolate is not a confection to be tossed haphazardly into just any dish that you’d normally use milk chocolate in. Dark chocolate isn’t just some joke of a candy you can slather on whatever, dark chocolate is a high-yield plutonium warhead to be deployed only after considerable soul searching. Use it too frequently or in too great a quantity, and nothing else you add to it is going to matter. Case in point, despite the tantalizing selection of toppings included on the bark, you only taste two things – dark chocolate for days, and a hint of salt. That’s certainly not bad – dark chocolate dusted with salt is a wonderful treat – but it makes the rest of the bark vanish into pointlessness. If Trader Joe’s was simply selling a bar of “dark chocolate with salty bits” I’d be singing it’s high praises – as it stands, there’s little reason to waste your calories on Oreo cookies and toffee you can’t taste. It’s a pretty good snack, but it’s not going to blow you away, and certainly isn’t worth the money when there are some many other amazing treats at TJ’s.

Trader Joe’s, I’d love to see a milk chocolate version of this that lets the rest of the flavors shine through – until then, there’s no reason to come back.

Would I Recommend It: It’s okay, but there are better buys out there.

Would I Buy It Again: Not until there’s a milk chocolate version.

Final Synopsis: A great idea, drowned out in too much dark chocolate.