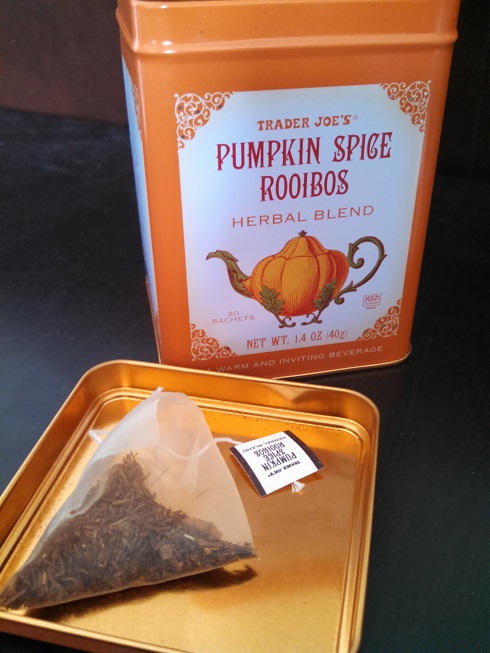 You guys know me – I never miss a chance to talk about rooibos tea. What a surpise, then, to see that Trader Joe’s has brought out a new Pumpkin Spice Rooibos herbal tea! The tin looks very nice – but this is rooibos tea we’re talking about. Is there anyway it can live up to the pretty packaging? Frankly, no – not at all. While it’s an improvement on other types of rooibos tea, it’s still just not that great.

Generally, when you spend enough time with a food product, no matter what your initial reaction is, you tend to warm up to it. I’ll share a story with you. The Japanese produce a food called natto, which is a “fermented” (read: partially rotten) slag of soy beans. Natto is typcally served in these little styrofoam bowls, about the size of a cassette tape, and when you crack one open all you see is this beige, lumpy, nobby, sticky, slimy mass of tiny, fetid soy beans. You’re then supposed to stir it up with chopsticks, which makes the gooey beans froth up into a white, stringy mess – almost like a thick tangle of spiderwebs mixed into the beans. I’m not even going to describe the sound or smell it makes when you stir these up. The taste is, as you can probably guess, gross and slimy and sticky. In short, it’s a food that offends all 5 senses – a foul-looking, foul-smelling, foul-tasting, gross sounding mess with a repulsive texture. Sometimes people like to crack a raw egg into it.

After living in Japan for a time, and being surrounded by the natto-eating Japanese, I eventually came to enjoy natto myself. It took about 18 months of extended exposure, but even to this day I will still pick up natto from local Asian market and have it for breakfast. My point is that, after extended exposure, I was eventually able to appreciate the acquired taste for natto and even came to enjoy it. Yet despite numerous tries and repeated attempts, I am absolutely unable to apprecieate rooibos tea on any level. It’s simply the lamest drink on the planet.

Maybe the difference is that natto, for all it’s shortcomings, is at least a taste. Rooibos tea, on the other hand, tastes like wet cardboard. That’s not meant to be a put down on rooibos, it’s simply the most descriptive phrase I can think of. Rooibos tea tastes exactly like wet cardboard – and coming from a guy who ate his fair share of pasteboard story book covers as a child, I know what I’m talking about. Of course, what else would you expect from rooibos tea? After all, the rooibos bush, from which it is cut, basically just a dry collection of scrubland twigs, and rooibos tea is just some of the twig shavings from that bush.

Yes, twigs! You’re boiling twigs! Look at what you’re doing people!  And sure, I suppose you could say that we’re just “boiling leaves” when we make ordinary tea – but the difference is that there’s a long history of delicious edible leaves (Uh, Spinach? I’m looking at you!), and no record at all of delicious twigs. In fact, I’d say anytime you find yourself eating or drinking twigs, that’s a sure sign that you’re doing something wrong.

Look, it’s absolutely telling that Trader Joe’s keeps coming out with versions of rooibos tea that are rooibos…and something else. Trader Joe’s Rooibos and Honeybush tea was certainly an attempt at trying to make these twigs more palatable, This new Pumpkin Spice Rooibos tea does a much better job of it, adding to the rooibos cinnamon, nutmeg, cloves and pumpkin flavor. Trader Joe’s is definitely onto something here! These traditional pumpkin pie spices add a delightful scent to the tea, and lend it a spicy, nuanced flavor tea. They just need to follow the trend and next time leave the rooibos out entirely. A pumpkin spice herbal tea that doesn’t also taste like wet cardboard? That’d be incredible. As it stands, this tea is palatable in so far as you can ignore the rooibos part. Everything else but that is nuanced and pleasantly invigorating and seasonal.

I’d certainly praise this as the best rooibos tea I’ve ever had, but that is faint praise indeed. If you’d like to drink a nice cinnamon spice tea this isn’t exactly that, but it’s close enough that it may satisfy you. However, I would strongly advise you to try some of Trader Joe’s much stronger Vanilla and Cinnamon Black Tea or delectable Spiced Chai instead. If you prefer an herbal tea, then definitely go with Trader Joe’s Herbal Blend Harvest Tea – a seasonal blend so good that I literally count the days for its return. Or go ahead and try this pumpkin spice rooibos – just don’t come complaining to me when you throw out the tin before you finish it.

Would I Recommend It: No, there are better teas at TJ’s.

Would I Buy It Again: No man, it’s rooibos tea. 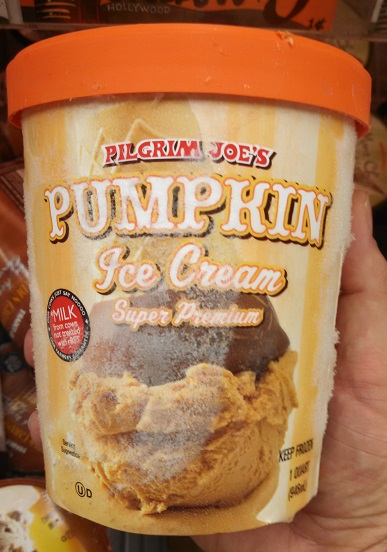 Your choice for a surprisingly pumpkin-free taste.

If you’ve made it this far through October, and you haven’t tired Trader Joe’s Pumpkin Ice Cream yet, I would be surprised. Who could resist the unusual appeal of that bright orange tub winking at your from the frozen food section? It may only come around once a year, but Trader Joe’s sweet and creamy Pumpkin Ice Cream is an annual must.

The fact that Trader Joe’s doesn’t carry strawberry ice cream, but it does carry pumpkin ice cream encapsulates the feeling of the store better than anything else I could write. Of all the products Trader Joe’s shoehorns pumpkin into it, brilliantly or otherwise, Trader Joe’s Pumpkin Ice Cream must have the broadest appeal and biggest fan base. Classic and unexpected at the same time, pumpkin ice cream just seems like a natural accompaniment to any harvest time festival you can name – from corn husking to Halloween.

I’ve written before that you never quite know what you’re going to get with a Trader Joe’s pumpkin-infused product. Sometime it will be absolutely bursting at the seams with pumpkin taste, while other times it will be pumpkin-y in name alone. Trader Joe’s Pumpkin Ice Cream falls squarely into this second camp. It might be rich, creamy and decadent soft serve – but is it pumpkin flavored? Not really. Even in spite of the inclusion of “pumpkin” as one of the ingredients listed ingredient (as one part of the “pumpkin base”), there isn’t much pumpkin flavor to be found. Savor it on your tongue, let it melt there, and you’ll detect maybe a hint of pumpkin-ness around the edges.

More correctly, Trader Joe’s should call this Pumpkin Pie Spice Ice Cream, which is much more what it tastes like – like a very creamy vanilla ice cream infused with cinnamon and nutmeg, tempered with a hint of cloves and ginger. It’s a broad, warm, mouth-filling taste – the soft, mellow flavor of the cream taking all of the bite out of the spices but keeping their warm, harmonious flavor.

Trader Joe’s compares this ice cream to pumpkin pie filling on the side of the carton, and that’s not really true at all. There’s nothing like the rich taste of pumpkin in this confection – but that’s not to be held against it. I, for one, would love to have a slice of warm pumpkin pie with a scoop of this ice cream decadently melting across the top.

Long story short – there isn’t much pumpkin to this pumpkin ice cream, but that’s not the end of the world. Think of this as “cinnamon and nutmeg” ice cream instead, and you won’t be disappointed.

Would I Recommend It: Yes, sweet and tasty.

Would I Buy It Again: Sure, I’ll get some more next year. 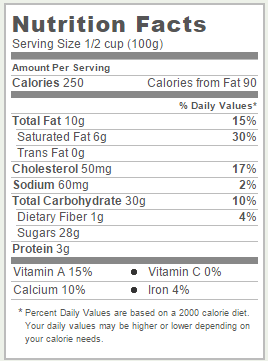