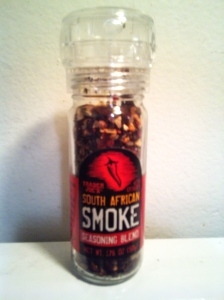 Let's all start smoking! (Our food!)

What have we here? Smoke-flavored seasoning, it promises us. But can anyone really bottle smoke? I mean, it’s smoke man. It’s famously elusive. If you could stick that flavor in a pepper mill and sell it for a couple bucks, then what the hell are people laboring over charcoals in smoke houses at minimum wage for? Let alone selling it in the very same pepper mill / pepper grinder doohickey you’re already selling your sea salt and flower pepper in? A prelimary whiff of the unopened container imparted the strong smoky musk of a dying campfire. Skepticism overruled by curiosity, I decided to give it a shot.

I tried Smoke Seasoning out on a couple different meats – some hamburgers I was grilling up outdoors and a nice, skinless chicken breast. After a few liberal grinds of the (to me) incredibly satisfying built in pepper mill apparatus and both items suddenly smelled a whole lot better. Smell, of course, is one thing. Taste? Quite another. One bite though, and I was stunned. The bastards over there at Joe’s did it. God know’s how, but it effortlessly infuses your food with a seductive, delectable waft of smoke. Just perfect.

What the hell’s in this stuff? Just smoke and paprika, a little salt and garlic? Seriously? And, as we all know, paprika does basically nothing aside from lending color – so basically, yeah, it’s just bottled smoke. But wait, now you’re telling me that the smoke in question is made from a renewable south african hardwood? Man oh man, Joe – you have out done yourself again.

The effectivness of this product is undeniable, but it’s scope is somewhat limited. I only tried it on meat, but the imagination suggests it might go well on grilled veggies too. Even if so, even the toughest of men, men who barbeque their every meal, don’t

want to have their every dish taste strongly smoke. This is an item best used in the height of summer revelry, a delicate but savory flavor to grace the periodic hedonistic grill session. As such, I predict this item will be sitting in a cherised spot in my cupboard until next summer comes.

Would I Recommend It: Without hesitation

Would I Buy It Again: Once this one runs out. 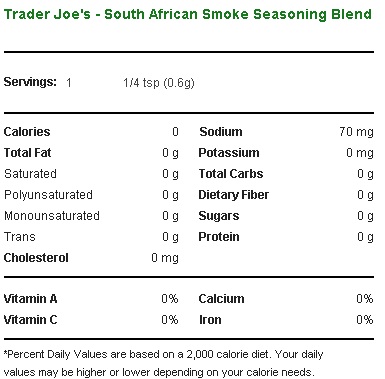