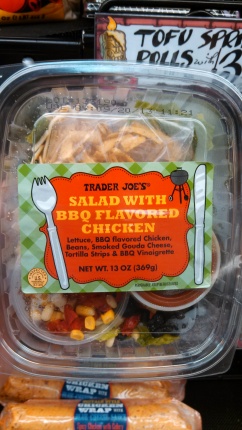 Today we have yet another entry in TJ’s seeming endless parade of salads. Unfortunately, Trader Joe’s Salad with BBQ Flavored Chicken is a pale imitation and poor match for the much more delicious MexiCali salad or, well, most of the salads I’ve tried from TJ’s.

TJ’s BBQ chicken Salad commits one of the great crimes of food – being bland. The salad is basically fine – it’s not unpalatable or gross or particularly unpleasant at all really – it’s simply mute, a more or less flavorless meal. This would have been less of a surprise if I this salad was all boiled watercress or something, but were talking about what sounds like a knock-out line up of ingredients. Lettuce, black beans, corn, minced red pepper, tortilla strips and smoked Gouda cheese. The smoked Gouda I’m not going to say a word against – it’s delicious burst of flavor in an otherwise uninteresting salad. Instead, let’s take a look at the BBQ flavored chicken itself. Sounds good, right? Or does it?

I suppose the “flavored” line in the title should have tipped me off. When people start tossing in qualifiers like “flavored”, as in “grape juice flavored beverage drink”, you know you’re going to be getting some sub-par cuisine. That’s what we’re getting here. This isn’t barbecue chicken, or chicken with barbecue sauce, its barbecue-flavored chicken, meaning, I suppose, that instead of actually cooking the chicken up like someone who cares, you sort of mist the chicken with a barbecue solution while it runs by on a conveyor belt. Whatever the method, the chicken holds only a weak bbq sauce taste that vanishes under the stronger lettuce and corn flavors.

Hand in hand with the bland bbq chicken, goes the bland BBQ Vinaigrette. We’ve already looked, very briefly, at the proud tradition of vinegar-based BBQ sauces native to the Carolinas. This is not they. The included BBQ vinaigrette tastes like a weak, watered down BBQ sauce that does no favor for the vegetable medley. If you cut this out and substituted it with a more robust, flavorful sauce, maybe a blue cheese of some sort, you might have a salad worth recommending. That’s probably more effort that it’s worth however.

Overall, this salad manages to be less than the sum of its parts. It’s not the worst salad in the world, but it really has nothing to recommend it either. When you’ve got panoply of truly great salads just waiting for you in the produce aisle, it’s hard to imagine why you’d ever go for this guy.

Would I Recommend It: No, try the Mexicali salad instead.

Would I Buy It Again: Maybe ironically.

Final Synopsis: A salad as bland as it is poorly named.