With a salad mix this good, it doesn’t matter what your name is.

Those word geniuses at Trader Joe’s have done it again, by gum! I never thought they’d top Avacado’s Number, and while Trader Joe’s Cruciferous Crunch may not have dethroned my favorite math-pun named guacamole, it comes close. After all, who in this wide world of popular appeal and lowest common denominator chooses to name their product after a tongue-tangling Latinate family? Trader Joe’s, that’s who. Keep up the good work, whoever it was at Trader Joe’s who was in charge of that! Some R&D wonk, maybe!

The Cruciferous Crunch Collection, as is not at all clear from the title, is a bag of shredded kale, Brussels sprouts, green cabbage and red cabbage. It is, in short, the nightmare scenario of every little kid sitting down to the dinner table. Back in the day that would have been me panicking at the site of kale, however since growing to adulthood I’ve developed a certain fondness for robust salads. To the modern day me, this bag of greens is a god send. The texture and heft of your greens are aspects of salads that go criminally under appreciated. Every time you’ve ever sat down do a cold plate of watery iceberg lettuce, someone has taken the texture and heft of their salad greens for granted. The absolute bastards.

Trader Joe’s Cruciferous Crunch mix brings vibrant tastes and textures to your salad, shading the other elements with the nutritious, nutty flavor of kale, the crunch of crisp shredded cabbage, and the dense chewiness of sliced Burssels sprouts. Throwing an handful of two of this mix in with your bed of baby spinach, romaine or, dear I say it, arugula, is the easiest thing you could do to upgrade your entire salad experience.

A word or two must be spared for the outre name of this bag of greens. Cruciferae is the Latin family name for a whole range of of dark, leafy greens – from broccoli to wasabi – and refers to the cross shaped leaves of the plants. Confusingly, cruciferous plants are also known under the more generally used family name brassicaceae, for no good reason other than to make trouble for botanists. I assume Trader Joe’s opted for cruciferous over brassicaceous because it’s marginally easier to pronounce, and because “Cruciferous Crunch Collection” sounds better than “Brassicaceous Bunch Bag”.

In any case, I would certainly assert  that the bag is amazingly named, and that if you’re at all a fan of good, satisfying salads this is an essential addition to your fridge’s crisper drawer.

Would I Recommend It: To salad makers everywhere.

Final Synopsis: An awesome name for an awesome bag of salad greens. 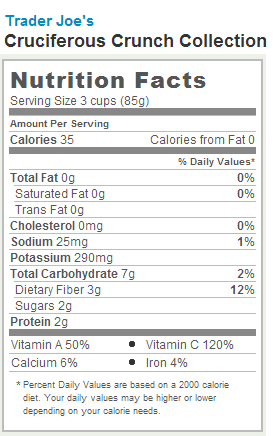