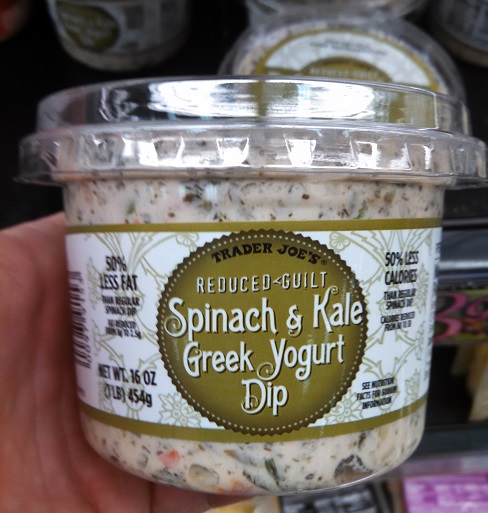 Tastes better than it sounds.

Few things are more tempting and decadent than a thick and creamy dip – and the king of these is no doubt the Spinach Dip. There is no party or social gathering that can’t be improved by the addition of a good spinach dip. Rich, cool and savory, even a mediocre spinach dip can elevate a humble tortilla chip to heavenly levels.

Of course, as is usual for anything that tastes so good, spinach dip is terrible for you. Loaded with lethal levels of fat, spinach dip is the sort of condiment designed to test your willpower to the utmost. Perhaps just a nibble, you think, maybe just a chip or two… We all know where this leads – into the grasping, inescapable current of a spinach dip whirlpool.

Fortunately, Trader Joe’s has come to the rescue with their new Trader Joe’s Reduced-Guilt Spinach & Kale Greek Yogurt Dip – another entry in their line of “reduced-guilt” dips. We took a look at their reduced guilt chunky guacamole and reduced guilt chicken salad before. Both delivered uneven results. As is so often the case for “diet” foods, it’s easy to make a low-fat, low-cal food product, it’s just hard to make it taste any good. “Reduced-guilt” products walk a dangerous line. You have to sacrifice flavor in order to be healthy, but stray too far to one side or the other and you end up with something pointless and stupid. Healthy, but too bad tasting, and no one will eat it. Good tasting, but not particularly healthy, and you might as well just get the full calorie version.

In this case, Trader Joe’s manages to walk the tight-rope perfectly. This Spinach and Kale dip isn’t quite as delicious as the real thing, but it’s damn well close enough. A rich mixture of kale, spinach, water chestnuts, red peppers, carrots, green onions, garlic and even a little mayo create a colorful flavor pallete that makes a satisfying, full-bodied snack for crackers or chips.

Whenever you sub out sour cream for plain greek yogurt, as TJ’s has done here, you’re going to lose a little zip. That’s still the case here. After a big bite of this dip, you’ll notice it’s missing a little something on the tail end – a touch bland where it should be a touch zingy. That’s just the unavoidable cost of keeping the fat content under control. Fortunately, the blend of other vegetables and seasonings pep the dip up, compensating for this flatness fairly well.

All in all, that’s a pretty good trade off. No every “reduced guilt” product is worth it, but this dip is an exception to the rule.

Would I Recommend It: Yes, healthy and tasty!

Would I Buy It Again: Sure – this is a winner.