Beautiful July is on us again, and with it so too has come the promise of an infinite string of perfect barbecues at sunset, – the golden moments of life. And of course, I can never think about big, blow out BBQs without thinking about GAZPACHO!

No, I have never had gazpacho before, and certainly never at a barbecue, but the two are inextricably linked in my mind because of, like so much in my life, The Simpsons.

As I know, and I’m sure you now know, gazpacho is tomato soup – served ice cold. Despite what you may have heard from the shouting of beligerent drunks, Gazpacho is actually a Spanish dish tracing its origin back to the Andalusia region of southern Spain. Nowadays it’s eaten throughout Spain and Portugal as a go to cool-down dish during hot summer months.

If your pop culture tastes run a little higher brow than mine, you might also remember a good gazpacho scene from the movie “Violets Are Blue” (1986). In it gazpacho is described as “salad in a blender”, and that’s probably as good of a definition as any. In addition to the aforementioned cold tomatoes, Trader Joe’s Gazpacho contains cucumbers, green and yellow bell peppers, and onion – all finely diced into a robust concoction of chunky vegetables. The important thing to remember about gazpacho, and the thing that makes it different from any other vegetable soup out there, isn’t just that you serve it cold, but that it’s actually made cold. This is a raw soup – uncooked from start to finish, and as a result it’s bursting with full-bodied, vegetable flavor. Not just vegetables, actually, but fruit as well.

Many gazpacho traditions coexist, including varieties that include strawberries or muskmelon. Trader Joe’s doesn’t go so far as to throw in any fruit chunks, but they do dress up their soup with a good dose of orange juice – as the second ingredient behind tomatoes. That’s still just enough to add a subtle citrus tang to the soup, and to add the faintest touch of sweetness to the soup. Other seasonings going into Trader Joe’s Gazpacho are garlic, jalapeno pepper, and a touch of sherry vinegar, all of which work to give the soup bit of a spicy, acidic edge.

This soup isn’t hiding any surprises. Having never had gazpacho before, I found that it tasted exactly like I expected a cold soup, tomato based soup to taste. This is a soup of overwhelming vegetable flavor, and it doesn’t pull any punches. There’s no saltiness, no real sweetness, just that zing of sherry vinegar layered on top of many vegetables.

If you like strong tomato soups, you’ll like this. There’s certainly a little more than just tomato going on in the background, but overall it begins with tomato and it ends with tomato. Personally, I wasn’t exactly blown away by it. The gazpacho wasn’t flawed in anyway, but the simplicity of this cold, straightforward soup didn’t manage to catch my heart. While I didn’t mind eating it, I did keep thinking about how it might taste better if I heated it up and maybe dressed it up a little. I could have done, but at that point I might as well have just picked up one of Trader Joe’s other great soups, their minestrone for instance.

I’m willing to admit that that’s a personal failure, however. If you crave a dish of heart vegetables, or want to beat the heat with a flame-free meal, this gazpacho is certainly worth a shot.

Would I Recommend It: Sure – it may not blow you away, but this is a hearty, healthy soup.

Would I Buy It Again: I don’t think so, there are too many other soups to try.

Final Synposis: A cold tomato soup, with a little zing thrown in. 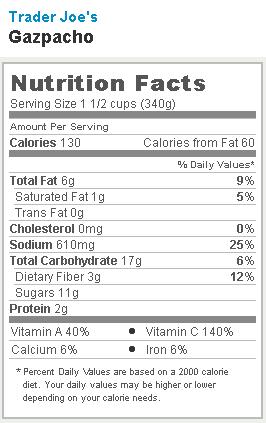 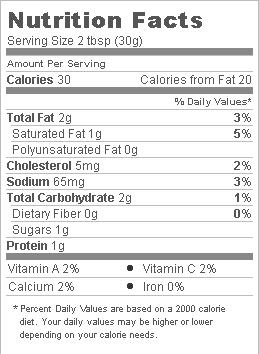 Trader Joe’s Watermelon Cucumber Cooler is one of those surprising products that doesn’t quite seem to fit at Trader Joe’s. Do-it-yourself fusion sushi? Sure. Popcorn seasoned with brown butter and french herbs? Why not. But a watermelon cooler? A summery, watermelon drink called a “cooler”. That seems oddly plebeian on the shelves next to Trader Joe’s French Market Sparkling French Berry Lemonade, and Trader Joe’s Italian Blood Orange Soda.

As much as I like Trader Joe’s, my blue collar roots sometimes rebel at the rather fancy image Joe likes to cultivate for himself. It’s a bit of a relief to see them throw the word “cooler” around on a relaxed summer drink – much in the tradition of Cactus Cooler and HI-C’s long mourned Ecto-Cooler. That may sound like I’m trying to damning this product with faint praise, but I mean it genuinely. Whether it’s pink lemonade or cherry coke, summer is the time for unnatural sugary drinks to bring out the kid in us. It’s the time for pretensions to fall to the way side and kick back with a nickle glass of Kool-aid and a slice of watermelon.

It’s in that very spirit that Trader Joe’s has given us this Watermelon Cucumber Cooler – a jug of refreshing, sweet and tasty juice flavored beverage. There’s not much to dislike with this beverage. What you see is what you get. Pour yourself a cool cup and you’ll taste exactly what it promises on the side, a sugar-sweetened, watermelon-flavored drink with the cool aftertaste of cucumbers.

I’m actually a fan of cucumbers in water. There’s something about the long, mellow aftertaste of a chilled cucumber that seems to slake the thirst as much as the water itself. The unsweetened cucucumber presence in this drink makes for an elegant grace note to what could have easily been one more too-sugary fruit drink. The Watermelon Cucumber Cooler strikes a balance closer to the unsweetened end of the drink spectrum than the overly sweet end. That makes it a rare participant in the summer drink wars – a beverage that satisfies the sweet tooth, quenches the thirst, refreshes with cucumber, and goes easy on the sugar.

Pairing watermelon off with cucumber in the first place might seem like a random choice – but not so random as it sounds. Both watermelon and cucumber are close cousins in the plant kindgom, siblings of the Family Cucurbitaceae, known generically, along with gourds and such, as curbits. This familial association makes for a fine flavor pairing, with the strong watermelon flavor blending seamlessly into the more understated cucumber, leaving you uncertain as to where the one taste ends and the other begins. Shine on you crazy curbits!

Sure, there’s still 23 grams of sugar per glass, but at least it’s from organic sugar and watermelon juice and not high fructose corn syrup. It’s not a health drink by any stretch of the imagination, just a fresh and refreshing take on the summer drink scene. If you’re not on the bad wagon with cucumber water to begin with, there may not be much here for you. If, on the other hand, you like cucumber water or have simply never tried it, I’d recommend this drink to quench your summer thirst.

Would I Recommend It: Yes – as long as you’re okay with the flavor of cucumbers.

Would I Buy It Again: I’ll pick one up the next time I head down to the beach. 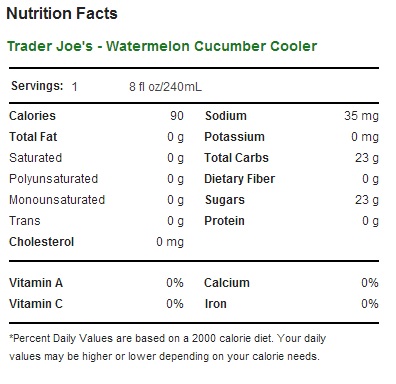