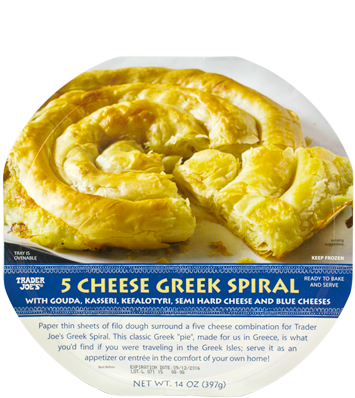 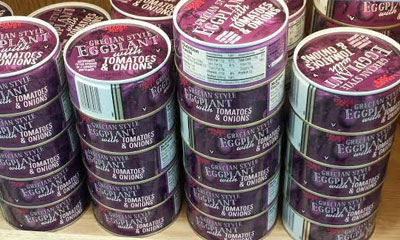 All the tinned eggplant a man could want!

I’ll admit it, I find something strangely alluring about tins of food. I can’t really enunciate exactly what it is that draws me to large, sealed metal tins, but whatever it is Trader Joe’s Grecian style Eggplant with Tomatoes and Onions has got it. There’s just something of a mystique to them something, that aura of the unknown that surrounds the Mystery Box, and would lead me to trade it all for what lies behind Door Number Two.

Surely that’s an impulse that we all share – even if it might be a touch harder to understand how that translates over to tins of food in my mind. After all, tin are clearly labeled aren’t they and – what’s more – generally cheap, low-quality, packed with preservatives and otherwise the last resort of cut-rate food producers everywhere. Isn’t the tin, after all, the receptacle of choice for the $0.49 can of tuna fish, the repugnant anchovy, and Armour Brand Potted Meat Food Product?

Yes, indeed – but whether its a sensory addiction to the feeling of gripping the ring tab and slowly prying back the lid or something even stupider, I can’t resist the siren song of a mysterious tin of food.

The last time I was lured down this path was for Trade Joe’s Dolmas, which I found off-puttingly oily but which many readers rose to the defense of as laudably authentic.

Trader Joe’s has here returned again to the Grecian well with this stewed eggplant product, even going so far as to use the exact same type of tin – namely the upside down one with the tab on the bottom. This still twirks my mind unpleasantly. Wouldn’t it be just as easy, maybe even easier, to put the label on in such a way that you could read it and open the canister at the same time?

Well,whatever the reason for it, once you’ve pried open the top/bottom of the tin you’ll find a densely packed stew of the eponymous eggplant, tomatoes and onion – more of a gloop actually. All the constituent parts seem as though they were cooked gently enough to preserve much of their shape and texture, but then crammed into the tin under sufficient force to blur the boundaries between one vegetable and another.

Disappointingly, to me anyways, what you get is exactly what is advertised – a mixture of the three vegetables (plus parsley, garlic and red pepper) that tastes like… well, those three vegetables. There’s no ineffable alchemy that takes place here, no whole greater than the sum of its parts – the three veggies mingle but don’t enhance each other in any remarkable way. The overall result is exactly what you’d get if you decided to stew up the same three ingredients in a pot yourself. Sure, Trader Joe’s is conveniently saving you the trouble with this tin, but the question is why? Who feels particularly compelled to get these particular ingredients in this form? That seems like a rare enough demand to me that I don’t necessarily need it on my shelf, ready to go at any moment.

If I did feel the urge to have some stewed eggplant, I’d probably just cook some up myself instead of going for an oil-packed can like we have here. For a dish that’s all veggies, you wouldn’t think it would be able to pack in 250 calories of fat (70% of all the calories in the dish!).

Trader Joe’s boasts that you’ll be “enchanted by the soft, melt-in-your-mouth texture and the smooth, almost squash-like, eggplant flavor.” If oily, stewed mush is something you have to have from a can, then this tin will suit you just fine. For me, I’ll be heading on to the next mystery tin without a backward glance.

Would I recommend It: Not in very strong terms, no.

Would I Buy It Again: I don’t see any reason to.

Final Synopsis: Stewed eggplant packed in oil. About as good as it sounds.