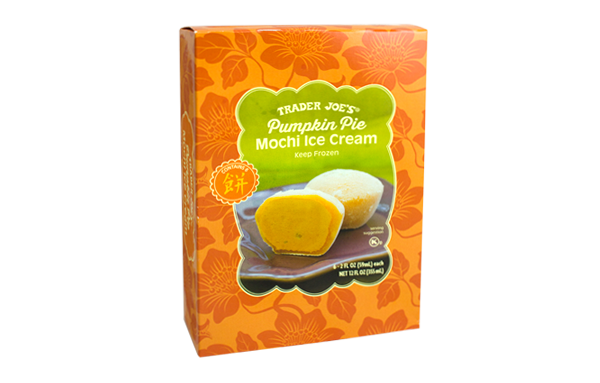 Trader Joe is a genius.

That’s where you’re wrong, friend, because I’ve saved the best for last, with Trader Joe’s Pumpkin Pie Mochi Ice Cream. Just go out and buy some right now and then eat them in your car. Frequently commenter Mara revealed recently that Trader Joe’s mini pumpkin ice cream sandwiches winked at her so delectably that she had to eat the entire box in the parking lot. This is an activity I understand all too well. What I’m saying to you now is, when it comes to Trader Joe’s Pumpkin Pie Mochi Ice Cream that’s not even optional. In all seriousness I want to open the box up, in your car or on the bus or while roaring down the road on your ‘roided up hog, and pop one in your mouth.  Don’t even wait, just do it.

What Trader Joe’s has done is taken their delightful pumpkin ice cream to the next level. Any ice cream is improved by enclosing it soft mochi, but TJ’s pumpkin pie ice cream – with it’s warm, delightful notes of cinnamon and nutmeg – really becomes something amazing.

Mochi, for those who may not be familiar, is a traditionally Japanese food. What it is, literally, is rice. Cooked rice that has been pounded over and over again until it forms into the sticky, chewy, malleable and unspeakably tender blob called mochi. In Japan it’s closely associated with festivals and big holidays, and is used in all sorts of sweets or just eaten by itself. The masterstroke of mochi, though, is in using it to hold little pockets of ice cream. A thin layer of soft, gently floured mochi (to prevent sticking) is wrapped around a good sized scoop of ice cream. As a result, you can hold it directly in your hand without worrying about it melting, while also enjoying the pleasant chewiness of the mochi-ice cream combo. It is, essentially, the Japanese take on the ice cream sandwich – only better. 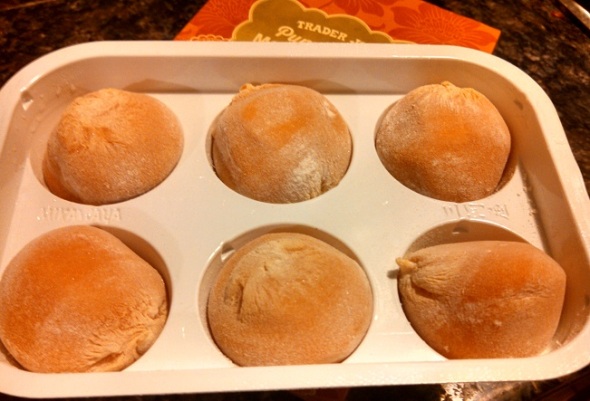 Most Trader Joes’ carry the Mikawaya brand of mochi ice cream in a variety of common flavors (vanilla, strawberry, and green tea). Only Trader Joe’s, however, offers something as crazy as Pumpkin Pie Mochi. Surprisingly, TJ’s doesn’t just use their premium pumpkin ice cream in these mochi, but instead has formulated a slightly different version (referred to in the name, as you may have noticed, as pumpkin pie ice cream). The main difference seems to be that the mochi ice cream freezes harder than the notoriously soft pumpkin ice cream, although I’d swear that the pumpkin pie ice cream actually tastes a little more pumpkin-y than the pumpkin ice cream itself. (This is another instance of a weird quirk at TJ’s where offshoot products sometimes taste more authentic than the progenitor product. Cf. TJ’s Sriracha hot sauce vs. TJ’s Sriracah Ranch) It’s also worth noting that they got the fat content under control in these mochi bites – only 20 calories from fat per ball.

By the way, one last tip – if you’ve never tried it, leave one of these out for a few minutes to melt slightly. The mochi will safely keep all the ice cream inside. Taking a bite of a partially melted ball that’s approaching room temperature is a heavenly experience.

Would I Recommend Them: Yes, a great combination of chewy and chilly.

Would I Buy Them Again: Yes, I’ll be crushed if they don’t have them again next year. 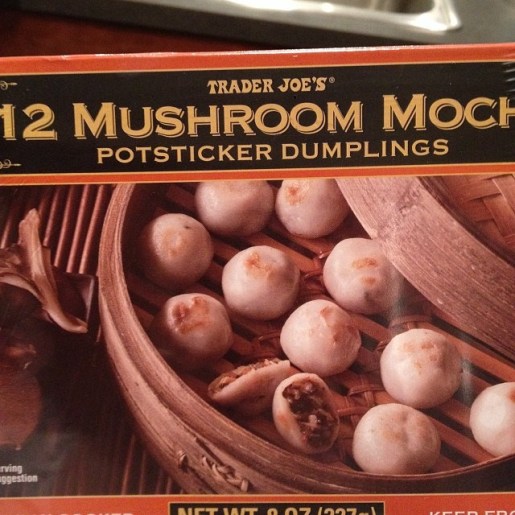 I’m sorry sir, but you just blew my mind.

Trader Joe’s you simply never cease to amaze me. Although we may fight from time to time, such as when you mix kale and soybeans, you never fail to bounce right back and deliver something both shockingly clever or shockingly tasty. In this case, Trader Joe’s 12 Mushroom Mochi Pot Sticker Dumplings is both.

What Trader Joe’s has done here is something unprecedented, bold and iconoclastic. They’ve taken an ordinary mushroom dumpling, a classic of Chinese cuisine, and remade it with a touch of a Japanese style. Chinese dumplings, classic potstickers, are traditionally made with thin, translucent wrappings made of flour and water. Trader Joe’s has kept the interior stuffing, but replaced the exterior wrapping with the marvelously soft, chewy and malleable mochi.

For those of you know don’t know, and I hope that is very few of you, mochi is a type of dough made by pulverizing cooked rice over and over until, taffy like, it melds into a sticky, chewy, gooey blob. It’s a food that’s long been an integral part of Japanese cuisine – sometimes eaten by itself, sometimes as the delicious delivery system for a lump of sweet bean paste, sometimes (and most commonly in the States) as the elastic casing for a ball of ice cream.

What Trader Joe’s has ingeniously done is to divorce the mochi of it’s sweet innards and replace them with a savory mushroom filling. The result is a dumpling unlike any you’ve ever tasted. In fact, the pairing is so unorthodox that I don’t blame TJ’s for giving them such a long and unwieldy moniker as “Mochi Potsticker Dumplings”. There’s simply no easy description for such a unique dish.

The result of this combination the best of both worlds – a lovely, chewy yielding exterior that gives way to a traditionally Chinese mushroom center, a mixture of Wood Ear and Shiitake mushrooms, carrots, bamboo shoots, and oyster sauce. The mushroom filling is loose, and relatively small in comparison with the thick mochi walls, but still full of savory flavor and entirely tender.

A quick trip to the microwave renders each little mochi dumpling wonderfully warm and soft. Sitting down and eating these little, pale orbs of pert dough is a tactile pleasure as much as a culinary one. The mochi extends and snaps with just the right viscoelastic properties – a delight of texture, taste and tensile strength.

We’ve talked before about TJ’s tendency to append weirdly specific numerals to to the front of their products, so I won’t get into it again here. I’m pretty much against it in every case, except where the number can only be expressed in scientific notation. However, these mushroom mochi are so delightful that they rise far above their mundane numbering. Simply put, if you’re looking for an elegant and intriguing Asian side, these mushroom mochi dumplings won’t disappoint.

Would I Recommend Them: Yes, to explore the intriguing recipie if nothing else.

Would I Buy Them Again: Yes, this is some of the best mochi I’ve had in years.

Final Synopsis: A hybrid Japense-Chinese dumpling that satisfies the senses. 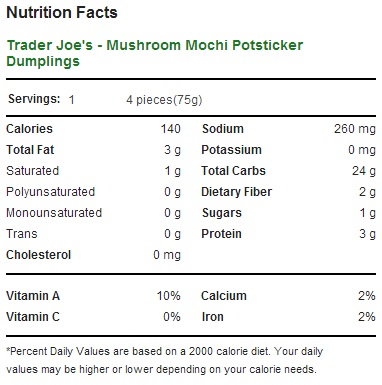